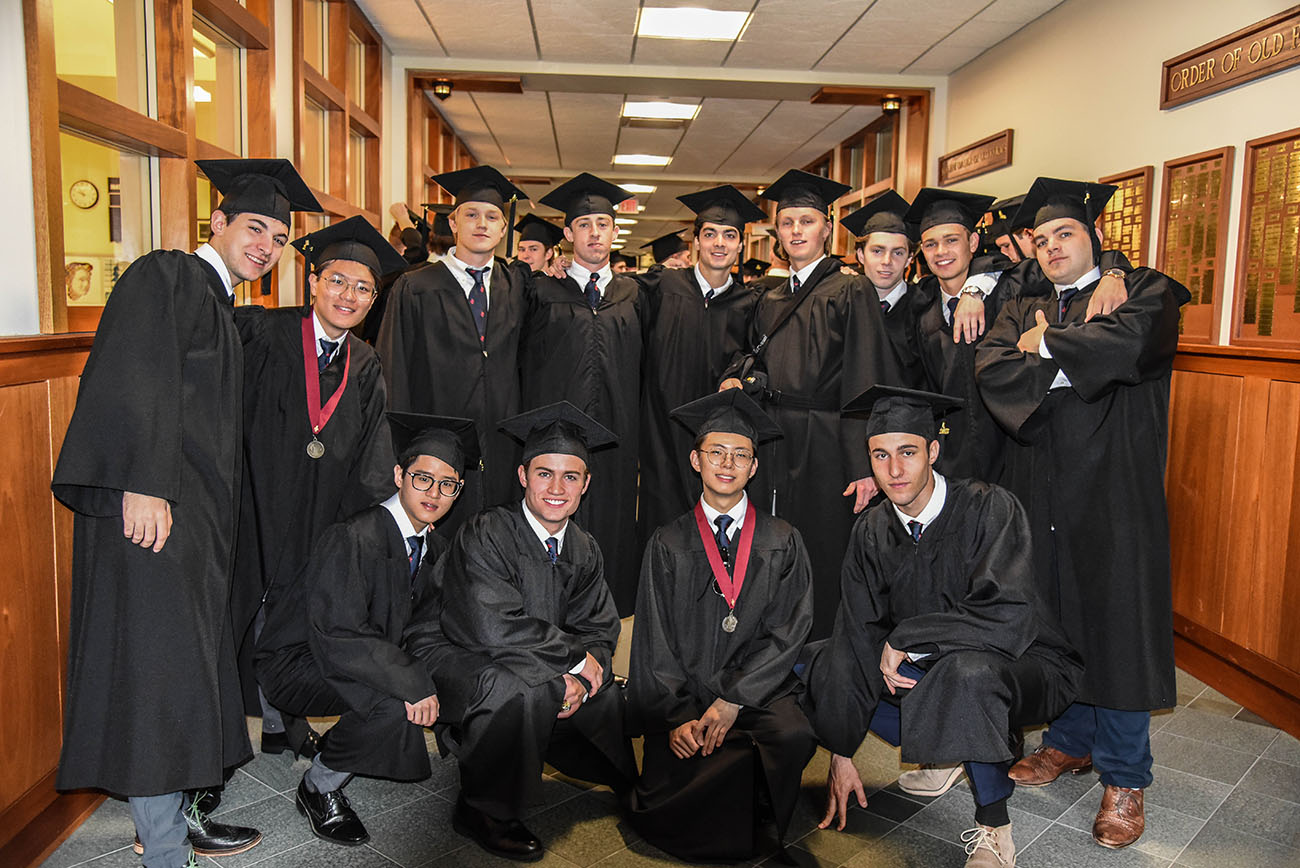 Mother Nature tried her best, but nothing could put a damper on Avon Old Farms School's 85th Commencement Exercises.

Our Headmaster's affinity for meteorology came in handy as he did the analysis and made the call to move the commencement inside for the first time since 2001. Even those with more years at Avon than Mr. LaRocque could only remember one other occasion when commencement was held indoors. The good news for 2018 is our field house was the perfect back up location for the ceremony. We had room for everyone who wanted to attend, climate control made it comfortable, and all could move right into the Food Court for lunch. The Class of 2018 will add the inside commencement ceremony to the many remembrances about their last year "on the farm." 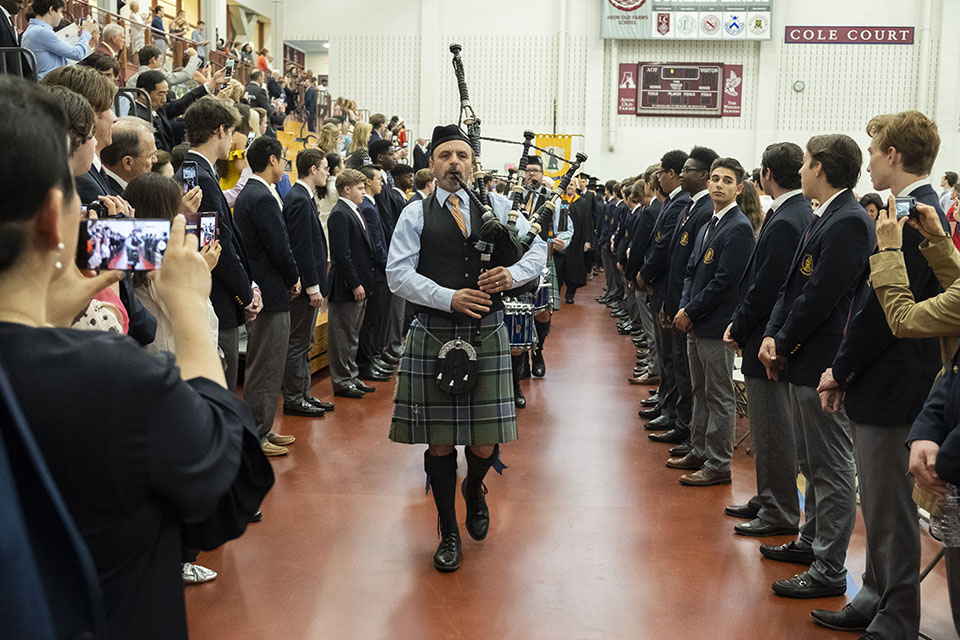 Even inside, many time-honored traditions carried on: the academic procession was led by the faculty; current students followed; finally seniors processed in, preceded by The Manchester Pipe Band.

This year, Peter Evans, a member of the Avon community for 47 years, was Avon's commencement speaker. In his address, Mr. Evans spoke to embracing change and always keeping our school motto in your life.  Embrace change, dream big, don't give up and, if you do fail - fail forward.  Being a history teacher at heart, Mr. Evans took us through a few wars, Edison and the light bulb, and George Springer...but he tied it all together with a big bow just as he did his incredible career at Avon.

After the commencement address, Headmaster LaRocque handed out some of Avon's most prestigious awards, including the Scholar of Distinction, the 12th Grade Prize for Academic Excellence, the Award for Earnest and Persistent Effort, the Award For Outstanding Improvement in the Academic Area, the George A. Murray Cup, The Student Council Spirit Award, Founder's Medals, the Order of Old Farms, and The F. Reed Estabrook, Jr. '36 Award. This year's Cashion Faculty Award went to Dr. Diana Malchoff, and the Fanning Faculty Award went to Joe Martinez.

After the awards, it was time: Assistant Headmaster John T. Gardner took the podium for the presentation of diplomas, which were handed out by Chairman of the Board of Directors Martin I. Cole H'16, P'04. When Ryan York took his final steps across the stage and the singing of Men of Avon was completed, graduation caps were flung triumphantly into the air.

The weather could also not keep our most recent alumni from going through the Alumni Gate and coming out on the other side to enjoy their cigars with enthusiastic family and friends on the Village Green. As Mr. LaRocque noted in his comments on Saturday night and at commencement, Avon is a place of traditions and those traditions will endure despite the weather. 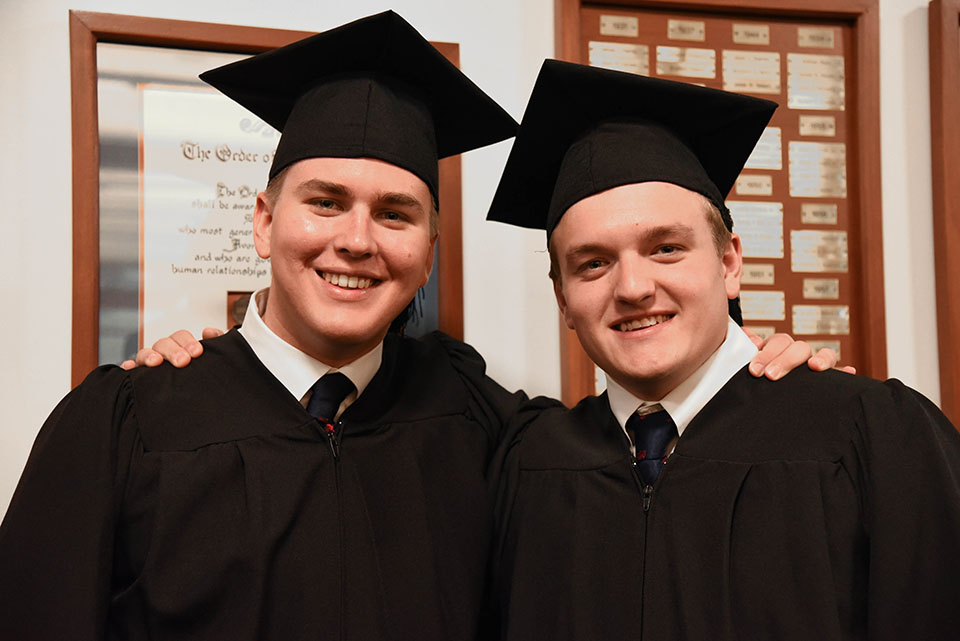 We wish the Class of 2018 the best and we begin our journey almost immediately to Commencement 2019.  But to finish up this year, at the same time we celebrated the Class of 2018 we had to shift our focus to get the underclassmen through their exams successfully.  So after exams and a bit of rest, we will be right back at it preparing for the 2018-2019 school year.