JoiN us for a virtual happy hour!

"This place means peace to my soul."

Students and alumni alike could learn a lot from Mike Cercone '75, and not just because he went to Harvard and holds a master's degree from MIT. Anyone who knows Mike can attest to his bold personality, captivating laugh, and genuine love for Avon Old Farms School.

As a post-graduate student, Mike took advantage of all the opportunities available to him while at Avon. The same can also be said as a member of the alumni community today. After joining the National Council, Mike has focused his efforts on alumni affairs and even hosted an incredible regional event recently in Boston. A successful businessman, Mike runs Scollay Square LLC, specializing in acquisition and turnaround of distressed real estate and financial assets. He now shares his knowledge and expertise with current students as an advisor to the Entrepreneur Club.

Most recently, Mike has called attention to Avon's exceptional faculty. His inspirational offer to match faculty and administration gifts to the Annual Fund led to an historic achievement: 100% participation from the faculty in the annual giving program. To see Mike's generosity in action click here...

For Mike, the Avon experience did not end when he graduated. Life as an alumnus offered a wealth of opportunities to give back to the school and today's Avonians.

Pictured Above: Mike Cercone '75 and his girlfriend, Ambassador Kathy Bunkard, outside of the Colosseum in Rome over Christmas '08 Tom Byrne '75 may not have strayed very far from Avon Old Farms - his recruitment firm, Thomas Byrne Associates, is just down the road in Farmington - but he has spent the last three decades developing a business acumen to rival any similar big-city placement agency.

Tom graduated from UNH in 1979, with a degree in business administration, a minor in economics, and an unparalleled work ethic. “I worked for and ran several businesses while I was in college to pay my tuition and expenses,” he recalls. “That included some on-campus services, some accounting roles, and also some sales jobs.

“After graduation, I ran a diversified temp staffing firm with one of my sisters. We eventually sold that firm to a national franchise, and I used that transaction as a springboard to move to something that was of greater interest,” he explains.

In 1985, he opened Thomas Byrne Associates, a recruitment firm dedicated to helping high-potential accounting and financial professionals realize their career aspirations. Over the last 30 years, he has dedicated himself to growing that firm, with an extensive knowledge of the skills required to succeed in the financial community - and a dedication to providing exceptional service to both his clients and his candidates.

“I certainly enjoy the people aspect of it,” he notes. ”There is a good deal of counsel, support, and impact when done correctly. I was drawn to the opportunity to work with early-in-career accounting talent, and also high potential financial leaders.

“There was a void in that particular space at the time I started,” he continues. “Another big draw was I could bring my own style and value system to the mix. It’s not something where there is only one way to be successful, so I felt that I could be successful on my own terms, with my own values and my own style.”

Though he has been fortunate to make his firm his own, Tom has also been quick to evolve with the changing nature of business. “When I first started, I advertised my position openings in the newspaper,” he states. ”Today’s job seekers do not buy newspapers to get the weekly help wanted ads! The internet has changed just about everything operationally in the business model. It offers a huge amount of access to data and changes relationships in just about every way.”

And yet Tom remains focused on his clients, and not the technology: “I will say that the benefit of a personal partner with focus, influence, access, and professionalism will never lose value, and so the internet has to be a tool to assist the process. A high percentage of the best accounting and finance career options are filled by the recruitment firms, and many of those are not on the internet. The brightest candidates prefer to be represented.”

Tom has enjoyed many benefits of keeping his business near Avon’s campus, but is quick to celebrate the strength of the bonds forged in high school that have endured time, distance, and tragedy. “It has been great to be close to the school for a number of reasons, but my classmates are very spread out around the country,” he says. “What has kept me close to them is the bond we formed at AOF, and our efforts to keep that going year after year.”

Those lasting relationships have endured many years of change at Avon, including some harder ones, such as the death of classmate Woody Woodwell in the terrorist attacks of September 11, 2001. “Twenty-seven years after graduating from Avon, more than half the class was at his funeral, and the theme of AOF through his service was huge,” recalls Tom.

“Our class was the first four-year class under George Trautman. We were also the class that Peter Evans started with, and we had many other iconic AOF educators and staff - such as Mr. Clark, Mr. Kron, Mr. Leavitt, Mr. Mendell, and Mr. Mason. The school was really focused on driving its mission at that point, and those people and the demands brought us closer together,” he says. “As we moved on, we stayed connected, and that was part of my role as head class agent. The diversity and personality of the folks in our class was most unifying.

“I have enjoyed being in a role where I’ve needed to stay on top of the class, share class notes and happenings, and keep people connected,” he says of his work as head class agent. ”I have also enjoyed being on the National Council and guiding some of the decisions around the school. Just this past week, I’ve started working with classmates Tim Trautman and Allan O’Connor to start the planning for our 40th Reunion in May. We are hoping that we will have a great turnout, and we are working hard to spread the word to our classmates - and also the Classes of ’74 and ’76 - who are invited to join us for dinner at the Forge on May 15.”

Tom’s support of Avon reflects his dedication to the school that has supported not just him, but his family, as well. Tom, whose daughter, Kelsey, enjoyed her time at the Ethel Walker School and is now a senior at Villanova, has continued to view Avon through the eyes of a student, as his nephews, Nick Malinosky '00 and Joe Sylvia '12, were each impacted by the same unique Avon experiences that Tom himself had witnessed as a student and an alumnus.

"They benefited greatly from the skill that Avon has in bringing the best out in many young men,” he observes. “At first, they both had a very challenging time from an academic perspective, as life at AOF was more difficult and structured than their previous situations. Avon gave them all the tools they needed to grow to meet those challenges, and by the end of their time at Avon, they were solid academically, very well-regarded on campus, varsity athletes, and lucky enough to be surrounded by new life-long friends."

Nick and Joe attended an Avon whose campus is fundamentally different than when Tom was a student. And yet, he says, “What I like most about Avon is what has not changed.

"The investment in the facilities is off-the-charts remarkable. But for me, it is the work that is done within those facilities and on the fields every day that makes Avon most special." 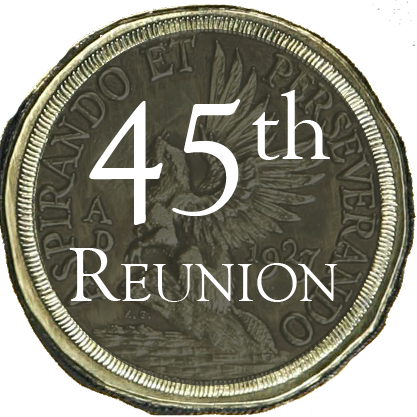