JOIN us for a virtual happy Hour! Mike’s journey from Avon Old Farms to Dartmouth College and Vermont Law School started with coming to Avon as a day student, but boarding his senior year.

“I have always said, I would love to re-enroll at Avon, but I just don’t know who is going to pay my tuition. Seriously, the school was so great when I was there and I have so many fond memories, but it seems even better now.”

The physical plant, the expansion and diversity of what is offered and the excellence of those offerings are all notable improvements mentioned by Mike.

“We barely had a music program. Back then, people practiced in the Forge. Now it is an award-winning program in such a perfect facility and the visual and performing arts have expanded accordingly.”

As a student, Mike could sense the dedication of faculty and noted that many of the same teachers are still at Avon, which he says, “is a testament to that dedication.”

“I have so many memories of teachers that go way beyond teaching. They were not just teachers or coaches, but almost like step-parents. I remember when my Spanish teacher, Mr. Comella, gave me a Saturday class (back then, usually reserved for students who needed remedial work) and I had never had one before. He gave me that class because I got a B- or a C on some assessment. He chewed me out for not doing my best, saying, ‘I was letting myself down,’ and then he let me leave the class. I thought about that and realized he was teaching me that not doing my best was letting everybody down. He was treating me as if I was his own son, and I realized that even back then.”

Mike chose to attend Dartmouth over his previous first choice, Bowdoin. His grandfather had much to do with that decision.

“Looking back, I had a Dartmouth-centered family; my father and older brother had attended, but by senior year I knew I wanted to apply early decision, and Bowdoin was high on my list. It would be my own thing, and I could have played football and lacrosse.”

Mike said, “My grandfather was the oldest of eight kids. In the 1920s, that meant he went to work, not college. In terms of raw mental horsepower, he was likely the smartest guy I ever knew and he convinced me that, overall, Dartmouth would probably be best, and he was right.”

Mike went to Dartmouth thinking he’d play lacrosse, but during his first fall he missed playing football, a sport he had played since age nine. In those days Dartmouth had a freshman team, as freshmen were not allowed to play varsity. He told his friends on the freshman team how much he missed the game, and they convinced him to try out for the team. He was a 5’9,” 185-pound walk-on and ended up being the starting nose guard. He credits Avon with giving him the confidence to give it a shot. Back at Avon it was football coach Kevin Driscoll who told him on the bus ride to the first pre-season scrimmage at Choate, “Mike, the left guard spot is open and I don’t really care what size you are. I know you have it in you to do this, you just have to know you can do it too."

Although Mike came to Avon with friends, he thinks one of its greatest strengths is how well everyone learns to connect with others across campus.

“There were no cliques at Avon, a benefit of single sex education, a pure meritocracy. At Avon, a hockey player might be best friends with somebody who played in the band. People were impressed by others who excelled at something different than they. There was no ‘us and them’ mentality.”

After his 1989 graduation from Dartmouth, where he majored in English/Creative Writing and also played lacrosse freshman year, he worked in radio and insurance for two years in Hartford. He then enrolled in the Vermont Law School where he earned a JD in 1995. He and his wife, Diane, married in 1996 on the Avon Old Farms School campus, and they now have two children, Emma, 14, and Aidan, 11.

Mike worked for a time in Vermont joining a civil litigation firm to represent plaintiffs and defendants in personal injury and professional error matters. After returning to Connecticut, he spent 10 years as a lead trial counsel in the litigation department of a Hartford firm. Four years ago, he joined the Hassett & George, PC in Simsbury, CT. It is a smaller firm with 13 attorneys in two locations, with each lawyer being specialized, one doing criminal defense and family law among other specialties, while Mike deals more with personal injury. Without the commute, he now has time to coach Aidan’s, LAX team. Aidan is in 5th grade, “but Avon would be perfect for him!” says Mike.

In recent years, Mike was secretary of Avon’s National Council, but was elected chairman this past year. He says it’s a way to give back and keep abreast of what is happening at school.

“Getting back on campus shows how much it has evolved, it really blows people away. It’s hard to get people back; everyone’s life is so busy, but to bridge the gap, streaming events or videos on websites helps. Even seemingly ‘disengaged alumni’ have so many positive things to say about the school.”

Mike has enjoyed that his oldest friends from Avon Old Farms, a group of seven or eight from the town of Avon, have remained close even though they scattered for college all over the country. In the last five years or so, everyone has come back to the Avon area from CA, WA, NJ, and VT and they all have remained friends and love returning to campus.

Besides important volunteer service to Avon including pro bono work during insurance litigation for dorm reconstruction, pro bono work at a women’s shelter/safe house in Hartford, and coaching his son’s team, Mike has picked up lacrosse 30 years after playing at school. Having a great time doing it again, he says, “No longer is there the angst of trying to move up to a better line,” and wishing part of his life away as he did when younger – “always wanting to move up from thirds to JV or to Varsity, or to the next line up.”

“I never did make the first line varsity in school, but I love how there is no pressure now, and what is left is just the sheer joy of playing for the love of the game.”

Asked for ‘words of wisdom’ Mike took the quote from his 1985 yearbook page, “Man’s chief purpose is to live, not to exist. I shall not waste my days trying to prolong them. I shall use my time.” J. London Paul Duwan '85 returned to Avon Old Farms School this fall – as a faculty member and as a parent (his son, Christopher, is part of the Class of 2018; son Connor is at Lawrenceville in the Class of 2016). Currently teaching western civilizations, honors early U.S. history, and A.P. Microeconomics, Paul is supremely comfortable in academia: he was valedictorian of the Class of 1985, an Order of Old Farms recipient, and attended Princeton University, from which he graduated with a degree in biology.

Following Princeton, Paul combined his passion for science with a talent for creative marketing in a 25-year career in the pharmaceutical industry. After receiving a master's in management from the Kellogg School of Management at Northwestern University, Paul worked for IBM Healthcare Consulting, Bristol-Myers Squibb, and Johnson & Johnson. His last role at J&J was as the diabetes global marketing leader, overseeing the global commercialization of a cutting-edge treatment for type 2 diabetes. Paul’s extensive travels brought him to every continent except Antarctica. He developed a profound appreciation for the opportunities and challenges of leading teams across disciplines, cultures, and time zones.

Great history teachers at Old Farms and Princeton fueled Paul's lifelong passion for history, especially military history, and he left his career in the pharmaceutical industry to follow that passion. "Timing was good, and I was looking for a way to give back more directly and immediately than I was able to do in the corporate world," he explains. "Although helping develop life-saving medicines and extending human life is certainly valuable and rewarding, teaching seemed to me to be a way to gain more immediate reward."

Beyond timing, it was easy for Paul to return to Avon. "I really appreciate now how Avon’s setting provides such easy access to the natural world," he observes. "Being outdoors between classes, spending time on beautiful fall and spring afternoons down on the playing fields - it helps you feel a connection to nature that is easily lost when you enter the working world."

Paul is a firm believer in the value of a strong liberal arts education; "it allows for an appreciation of the interconnectedness of ideas across different subjects, and serves as the foundation for understanding our place and responsibilities in the world," he notes. Avon's foundation in the liberal arts was attractive to him as he considered his return to campus, along with those mentors who played a part in his experience as a student. "Coach Comella, Mr. Evans, Mr. Custer, and Mr. Clark were among my many favorites," he recalls. "It is a gift to be able to see so many different role models in action at Avon and be able to try out different aspects as one creates his own approach to the world.

"The idea that you can make your own luck the harder you work really resonated with me," he continues. "I have been so impressed with how hard the students work here at Avon…I had forgotten that! It is very inspiring to me and makes me want to go the extra mile as a teacher." 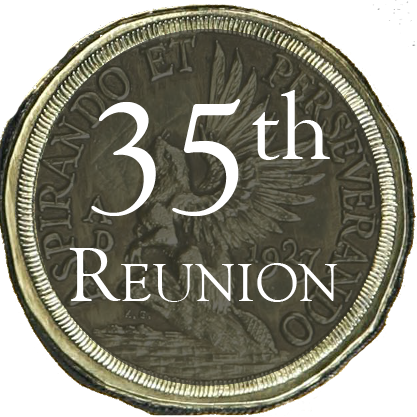