The Avon Old Farms Soccer Camp is designed to improve each player’s technical ability, tactical awareness, and fitness in a fun, inclusive environment. Each camper will be coached by current members of the Avon Old Farms varsity soccer program. Coaches work closely with players to instill traits that our program values: teamwork, a strong work ethic, and a love for soccer.

The Soccer Lab at AOF 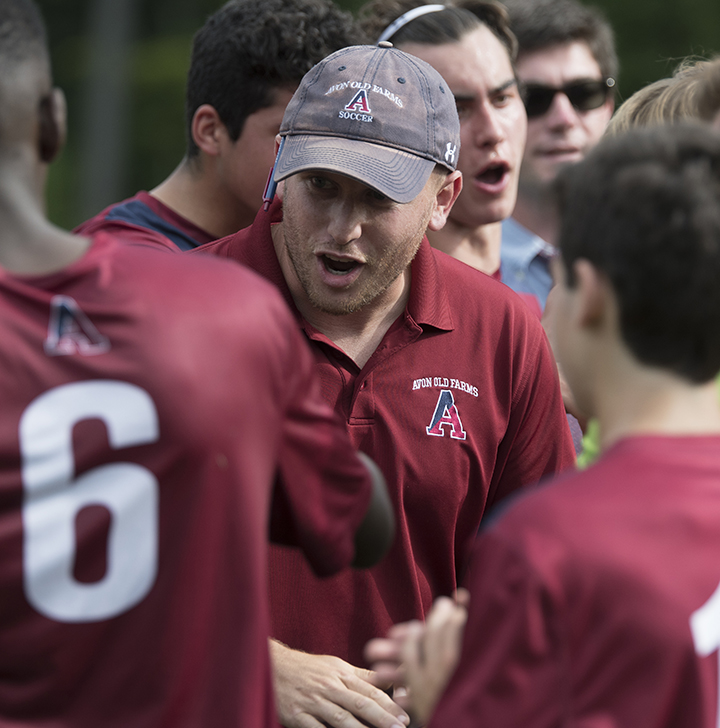 Campers will learn and play on meticulously maintained fields and athletic facilities that are among the best in New England. The athletic tradition at Avon Old Farms is well established, and the soccer program is part of that great tradition. Our soccer team has won the New England Championship twice since 2005. Additionally, Avon has established a strong record of sending players to some of the top collegiate programs in the country. Since 2010, graduates have joined soccer programs at the University of Connecticut, University of Louisville, Lafayette College, George Washington University, Haverford College, Connecticut College, Gettysburg College, Northeastern University, and UMass Boston.

“Our son attended Coach Martinez’s summer soccer camp last August. He had just turned 13 and we had some concerns we were sending him too early. These concerns vanished the moment he stepped out of the car. AOF Players, campers, coaches, balls and smiles were flashing everywhere. Our son happily joined right in. The camp consists of Coach Martinez and many of the AOF Varsity Players as player coaches. This chemistry created an immediate bond, a young boy looking up to a young man. Over the course of the week, the relationship grew from student coach to mentors. All the etiquette and sportsmanship Coach Martinez demands from his AOF players was filtering into my son in a fun and challenging environment. By the end of the week, he absolutely improved his ball control, has a clearer understanding of field position and has a deeper understanding of the game. All of these traits shone in his breakout season last fall. But it wasn’t the goals or assists that most impressed us. It was his poise, his sportsmanship and who he had become on the field. It made us so proud that he become a player of heart. Perhaps it was always in there, but we certainly credit Coach Martinez’s camp for creating a safe environment to discover his game and then allowing him the space to play it.”  -Mike Lech, Parent of Soccer Camper

Medical waiver and emergency forms must be received by July 31. These forms can be found on the Summer Program page of our school website by clicking here.

Throughout the summer, the opportunity may arise for your child's picture to be taken for camp publications. It is assumed that the parent/guardian condones this practice unless a written note stating otherwise is received on or before the first day of camp. For safety reasons we do not publish or release the names or any other personal information about the children whose photos we use or who attend the camp. Your information is confidential and secure.

For the safety and welfare for all campers, Avon Old Farms Summer Camp Programs reserves the unrestricted right to dismiss any camper whose conduct or influence, in the opinion of the Camp Director, is detrimental to the best interests of the camp. There will be no refunds in this case.